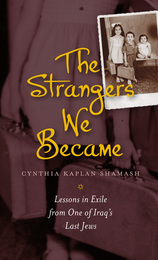 This riveting and utterly unique memoir chronicles the coming of age of Cynthia Shamash, an Iraqi Jew born in Baghdad in 1963. When she was eight, her family tried to escape Iraq over the Iranian border, but they were captured and jailed for five weeks. Upon release, they were returned to their home in Baghdad, where most of their belongings had been confiscated and the door of their home sealed with wax. They moved in with friends and applied for passports to spend a ten-day vacation in Istanbul, although they never intended to return. From Turkey, the family fled to Tel Aviv and then to Amsterdam, where Cynthia’s father soon died of a heart attack. At the age of twelve, Sanuti (as her mother called her) was sent to London for schooling, where she lived in an Orthodox Jewish enclave with the chief rabbi and his family. At the end of the school year, she returned to Holland to navigate her teen years in a culture that was much more sexually liberal than the one she had been born into, or indeed the one she was experiencing among Orthodox Jews in London. Shortly after finishing her schooling as a dentist, Cynthia moved to the United States in an attempt to start over. This vivid, beautiful, and very funny memoir will appeal to readers intrigued by spirituality, tolerance, the personal ramifications of statelessness and exile, the clashes of cultures, and the future of Iraq and its Jews.
AUTHOR BIOGRAPHY
Considered an expert on the Iraqi-Jewish archive and diaspora, CYNTHIA KAPLAN SHAMASH has spoken widely about her experiences and published an op-ed in the New York Times. She was elected to the board of the World Organization of Jews from Iraq in 2011 and currently lives in New York City, where she has her own dentistry practice and is married with five children.
TABLE OF CONTENTS