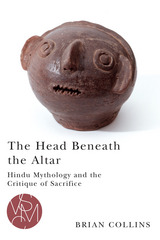 In the beginning, says the ancient Hindu text the Rg Veda, was man. And from man’s sacrifice and dismemberment came the entire world, including the hierarchical ordering of human society. The Head Beneath the Altar is the first book to present a wide-ranging study of Hindu texts read through the lens of René Girard’s mimetic theory of the sacrificial origin of religion and culture. For those interested in Girard and comparative religion, the book also performs a careful reading of Girard’s work, drawing connections between his thought and the work of theorists like Georges Dumézil and Giorgio Agamben. Brian Collins examines the idea of sacrifice from the earliest recorded rituals through the flowering of classical mythology and the ancient Indian institutions of the duel, the oath, and the secret warrior society. He also uncovers implicit and explicit critiques in the tradition, confirming Girard’s intuition that Hinduism offers an alternative anti-sacrificial worldview to the one contained in the gospels.
AUTHOR BIOGRAPHY
Brian Collins holds the Drs. Ram and Sushila Gawande Chair in Indian Religion and Philosophy at Ohio University.
TABLE OF CONTENTS
Contents
Acknowledgments
Introduction
Rivalries
Priests and Kings, Oaths and Duels
Epic Variations on a Mimetic Theme
Meaning: The Secret Heart of the Sacred
Yajñānta: The End of Sacrifice
Notes
Bibliography
Index
REQUEST ACCESSIBLE FILE