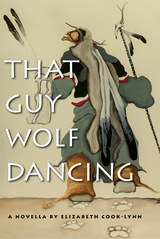 From one of the writers of the twentieth-century Native American Literary Renaissance comes a remarkable tale about how to acknowledge the past and take a chance on the future. Rooted in tribal-world consciousness, That Guy Wolf Dancing is the story of a young tribal wolf-man becoming a part of his not-sonatural world of non-tribal people. Twenty-something Philip Big Pipe disappears from an unsettled life he can hardly tolerate and ends up in an off-reservation town. When he leaves, he doesn’t tell anyone where he is going or what his plans, if he has any, might be. Having never taken himself too seriously, he now faces a world that feels very foreign to him. As he struggles to adapt to the modern universe, Philip, ever a “wolf dancer,” must improvise, this time to a sound others provide for him. Like the wolf, Philip sometimes feels hunted, outrun, verging on extinction. Only by moving rhythmically in a dissident, dangerous, and iconic world can Philip Big Pipe let go of the past and craft a new future.
AUTHOR BIOGRAPHY
Elizabeth Cook-Lynn is a member of the Crow Creek Sioux Tribe, Fort Thompson, and lives in the Black Hills of South Dakota. Since her retirement from Eastern Washington University, she has been a Visiting Professor and Consultant in Native American Studies at the University of California at Davis and at Arizona State University at Tempe, as well as a writer-in-residence at several universities.
TABLE OF CONTENTS
Contents
Chapter 1
Chapter 2
Chapter 3
Chapter 4
Chapter 5
Chapter 6
Chapter 7
Chapter 8
Chapter 9
Chapter 10
Chapter 11
Chapter 12
Chapter 13
Chapter 14
Chapter 15
REQUEST ACCESSIBLE FILE