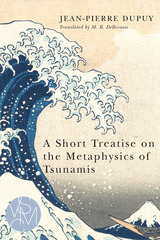 In 1755 the city of Lisbon was destroyed by a terrible earthquake. Almost 250 years later, an earthquake beneath the Indian Ocean unleashed a tsunami whose devastating effects were felt over a vast area. In each case, a natural catastrophe came to be interpreted as a consequence of human evil. Between these two events, two indisputably moral catastrophes occurred: Auschwitz and the bombing of Hiroshima and Nagasaki. And yet the nuclear holocaust survivors likened the horror they had suffered to a natural disaster—a tsunami.
Jean-Pierre Dupuy asks whether, from Lisbon to Sumatra, mankind has really learned nothing about evil. When moral crimes are unbearably great, he argues, our ability to judge evil is gravely impaired, and the temptation to regard human atrocity as an attack on the natural order of the world becomes irresistible. This impulse also suggests a kind of metaphysical ruse that makes it possible to convert evil into fate, only a fate that human beings may choose to avoid. Postponing an apocalyptic future will depend on embracing this paradox and regarding the future itself in a radically new way.
The American edition of Dupuy’s classic essay, first published in 2005, also includes a postscript on the 2011 nuclear accident that occurred in Japan, again as the result of a tsunami.
AUTHOR BIOGRAPHY
Jean-Pierre Dupuy is Professor of Social and Political Philosophy at the École Polytechnique, Paris.
TABLE OF CONTENTS
Contents
A Note on the Translation
Acknowledgments
Chapter 1. Genesis
Chapter 2. From Lisbon to Sumatra
Chapter 3. The Naturalization of Evil
Chapter 4. The Problem of Future Catastrophe
Appendix. Japan, 2011
Notes
Index
REQUEST ACCESSIBLE FILE