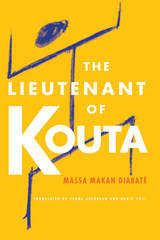 The Lieutenant of Kouta is the first novel in Massa Makan Diabaté’s award-winning trilogy. Featuring an introduction by leading Diabaté scholar Cheick M. Chérif Keïta and Shane Auerbach, it tells the story, part tragicomic and part hagiographic, of an African lieutenant in the French Army who returns as a decorated hero from the battlefields of Europe to Kouta, a fictionalized version of the author’s own birthplace, the Malian town of Kita. Upon his return, Siriman Keita finds it difficult to adjust to village life as he navigates traditional customs in his attempts to create his place in the predominantly Muslim Kouta. The novel offers a rich and nuanced representation of Mali on the brink of independence; it is a tapestry of traditional Mandinka society and the French colonial apparatus, illustrating the dynamic interplay between the two. This text is, ultimately, a story of one man’s transformation coinciding with that of his country.
AUTHOR BIOGRAPHY
Massa Makan Diabaté (1938–1988) was a Malian author and griot. His trilogy of novels—Le lieutenant de Kouta, Le coiffeur de Kouta, and Le boucher de Kouta—won the 1987 Grand prix international de la Fondation Léopold Sédar Senghor.

Shane Auerbach is a PhD candidate in economics at the University of Wisconsin–Madison and a visiting instructor at Carleton College. His research focuses on microeconomic theory and industrial organization.

David Yost received his PhD in English from the University of Wisconsin–Milwaukee. His short stories have appeared in more than thirty magazines, including Ploughshares, The Southern Review, and The Sun, and he is an editor of the anthology Dispatches from the Classroom: Graduate Students on Creative Writing Pedagogy.
TABLE OF CONTENTS
Introduction
The Lieutenant of Kouta
Principal Characters
1.
2.
3.
4.
5.
6.
7.
8.
9.
10.
11.
12.
13.
14.
15.
16.
Notes
REQUEST ACCESSIBLE FILE