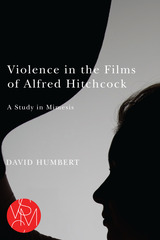 Parting ways with the Freudian and Lacanian readings that have dominated recent scholarly understanding of Hitchcock, David Humbert examines the roots of violence in the director’s narratives and finds them not in human sexuality but in mimesis. Through an analysis of seven key films, he argues that Girard’s model of mimetic desire—desire oriented by imitation of and competition with others—best explains a variety of well-recognized themes, including the MacGuffin, the double, the innocent victim, the wrong man, the transfer of guilt, and the scapegoat. This study will appeal not only to Hitchcock fans and film scholars but also to those interested in Freud and Girard and their competing theories of desire.
AUTHOR BIOGRAPHY
David Humbert is an Associate Professor and Chair of the Department of Religious Studies at Laurentian University in Sudbury, Ontario.
TABLE OF CONTENTS
Contents
Acknowledgments
Introduction
Chapter One. The Birds
Chapter Two. Shadow of a Doubt
Chapter Three. Rope
Chapter Four. Strangers on a Train
Chapter Five. The Wrong Man
Chapter Six. Vertigo
Chapter Seven. Psycho
Conclusion
Notes
Bibliography
Index
REQUEST ACCESSIBLE FILE