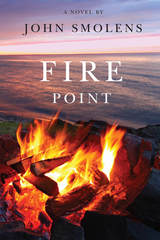 At nineteen, Hannah LeClaire already has a reputation in the village of Whitefish Harbor, in Michigan’s Upper Peninsula. She is given to solitary walks along the shore of Lake Superior, and on a cold April day she meets Martin Reed, who has just moved north from Chicago to renovate a dilapidated house he has inherited. Hannah immediately realizes that Martin, who is ten years her senior, is also an outcast and quite unlike anyone she has ever met.

A story of love, vengeance, and renewal, Fire Point depicts the young couple’s attempt to rebuild their lives. But when Hannah’s former boyfriend Sean Colby returns home after a mysterious early discharge from the army, he cannot accept the fact that she has a new lover and commits a series of increasingly violent acts against Hannah, Martin, and the house that has come to represent their future.