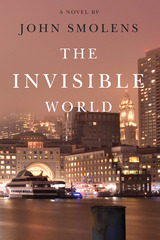 The Invisible World portrays how a remarkable family is indelibly marred by one of the darkest conspiracy theories in American history: the gunman on the grassy knoll. Boston journalist Sam Adams suspects that his father may have been the unidentified gunman in the JFK assassination. True or not, Sam is certain that his father, the elusive John Adams, is responsible for his sister Abigail’s tortured life of drugs, prostitution, and the conviction that she is a descendant of Salem witches, as well as the strange circumstances that surround his mother’s final hours.

After Sam's mother dies and is cremated, her ashes are stolen. Believing that his father is responsible, Sam pursues the man he has not seen in years. He discovers that he is not the only one searching for his father—federal agents, a disgraced politician, a retired Boston cop, and several journalists join the chase.

“The Invisible World is more than a first-rate political thriller,” says The Boston Globe. “It’s an absorbing tale of alienation and loss, and the ramifications of a rootless, troubled family.” What Sam Adams ultimately discovers is that the shadowy realm of conspiracies conjures a world of hidden truths and intrigue in which the familiar is the most mysterious force of all.
AUTHOR BIOGRAPHY
John Smolens has published ten works of fiction, including Quarantine, The Schoolmaster’s Daughter, and Wolf’s Mouth. He lives in Marquette, Michigan.
TABLE OF CONTENTS
Title Page
Part I. The Diabolical Familiar
1
2
3
4
5
6
7
8
9
Part II. Spectral Evidence
10
11
12
13
14
15
16
17
18
Part III. "The Citty upon a Hill
19
20
21
22
23
Part IV. The Elect
24
25
26
27
28
29
Part V. Compact
30
31
About the Author
REQUEST ACCESSIBLE FILE