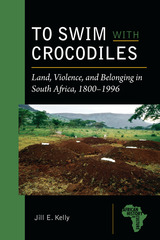 To Swim with Crocodiles: Land, Violence, and Belonging in South Africa, 1800–1996 offers a fresh perspective on the history of rural politics in South Africa, from the rise of the Zulu kingdom to the civil war at the dawn of democracy in KwaZulu-Natal. The book shows how Africans in the Table Mountain region drew on the cultural inheritance of ukukhonza—a practice of affiliation that binds together chiefs and subjects—to seek social and physical security in times of war and upheaval. Grounded in a rich combination of archival sources and oral interviews, this book examines relations within and between chiefdoms to bring wider concerns of African studies into focus, including land, violence, chieftaincy, ethnic and nationalist politics, and development. Colonial indirect rule, segregation, and apartheid attempted to fix formerly fluid polities into territorial “tribes” and ethnic identities, but the Zulu practice of ukukhonza maintained its flexibility and endured. By exploring what Zulu men and women knew about and how they remembered ukukhonza, Kelly reveals how Africans envisioned and defined relationships with the land, their chiefs, and their neighbors as white minority rule transformed the countryside and local institutions of governance.
AUTHOR BIOGRAPHY
JILL E. KELLY is an Assistant Professor of African history at Southern Methodist University. She has published articles in the Journal of Southern African Studies, African Historical Review, and Gendering Ethnicity in African Women’s Lives.
TABLE OF CONTENTS
Contents
List of Illustrations
Preface and Acknowledgments
Abbreviations
Note on Terminology
Prologue
Introduction
Part 1: Violence, Allegiance, and Authority in the Making of Kingdoms and Colony
Chapter 1. Chief by the People: Nomsimekwana Mdluli, Security, and Authority in the Time before Tribes
Chapter 2. He Said He Wants to Be Registered as a Chief: Hereditary Chiefs and Government Tribes, 1843–1905
Part 2: The Violence of Young Men, Forced Removals, and Betterment
Chapter 3. Ngangezwe Claims to Be a Hereditary Chief: Organizing Authority by Wards and War, 1905–1930
Chapter 4. They Refuse to Go to Other Chiefs’ Areas: The Nagle Dam and Forced Removals, 1930–1950
Chapter 5. He Said He Wanted the Tribe to Decide: Boundaries and Betterment, 1948–1971
Chapter 6. Only the Fourth Chief: Ethnic Politics and Land Jurisdiction, 1971–1988
Part 3: Civil War in South Africa
Chapter 7. Because My People Are in the MDM, I Have to Be with Them: Ethnic and African Nationalist Politics during Civil War, 1983–1990
Chapter 8. They Were Worried about the Way Our Chief Was Managing His Nation: Land, Authority, and Belonging, 1990–1996
Conclusion
Notes
Glossary (isiZulu–English)
Bibliography
Index
REQUEST ACCESSIBLE FILE