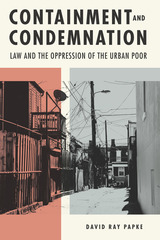 The populations of American cities have always included poor people, but the predicament of the urban poor has worsened over time. Their social capital, that is, the connections and organizations that traditionally enabled them to form communities, has shredded. Economically comfortable Americans have come to increasingly care less about the plight of the urban poor and to think of them in terms of “us and them.” Considered lazy paupers in the early nineteenth century, the urban poor came to be seen as a violent criminal “underclass” by the end of the twentieth. Living primarily in the nation’s deindustrialized inner cities and making up nearly 15 percent of the population, today’s urban poor are oppressed people living in the midst of American affluence. This book examines how law works for, against, and with regard to the urban poor, with “law” being understood broadly to include not only laws but also legal proceedings and institutions. Law is too complicated and variable to be seen as simply a club used to beat down the urban poor, but it does work largely in negative ways for them. An essential text for both law students and those drawn to areas of social justice, Containment and Condemnation shows how law helps create, expand, and perpetuate contemporary urban poverty.
AUTHOR BIOGRAPHY
David Ray Papke is Professor of Law at Marquette University in Milwaukee, Wisconsin.
TABLE OF CONTENTS
Contents
Acknowledgments
Introduction
Chapter 1. Labeling the Urban Poor as Criminals
Chapter 2. No Place to Call Home
Chapter 3. Channeling Family Life
Chapter 4. Marketplace Exploitation
Chapter 5. Health Inequity
Conclusion
Notes
Bibliography
Index
REQUEST ACCESSIBLE FILE