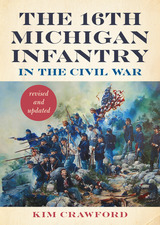 On the hot summer evening of July 2, 1863, at the climax of the struggle for a Pennsylvania hill called Little Round Top, four Confederate regiments charge up the western slope, attacking the smallest and most exposed of their Union foe: the 16th Michigan Infantry. Terrible fighting has raged, but what happens next will ultimately—and unfairly—stain the reputation of one of the Army of the Potomac’s veteran combat outfits, made up of men from Detroit, Saginaw, Ontonagon, Hillsdale, Lansing, Adrian, Plymouth, and Albion. In the dramatic interpretation of the struggle for Little Round Top that followed the Battle of Gettysburg, the 16th Michigan Infantry would be remembered as the one that broke during perhaps the most important turning point of the war. Their colonel, a young lawyer from Ann Arbor, would pay with his life, redeeming his own reputation, while a kind of code of silence about what happened at Little Round Top was adopted by the regiment’s survivors. From soldiers’ letters, journals, and memoirs, this book relates their experiences in camp, on the march, and in battle, including their controversial role at Gettysburg, up to the surrender of Gen. Robert E. Lee at Appomattox Court House.
AUTHOR BIOGRAPHY
Kim Crawford is a retired newspaper reporter and author of The Daring Trader: Jacob Smith in the Michigan Territory and coauthor of The 4th Michigan Infantry in the Civil War. He has written about Michigan Civil War soldiers for Michigan History magazine, served as guest curator for the Flint Sloan Museum’s 2012 Civil War exhibit, The Brave and the Faithful, and has given talks on both the 4th and 16th Michigan Infantry regiments to historical societies and Civil War roundtables.
TABLE OF CONTENTS
Contents
Preface
Acknowledgments
Chapter 1. April–September 1861: The Time for Action Has Arrived
Chapter 2. September 1861–March 1862: Stockton's Worm-Eaters
Chapter 3. September 1861–March 1862: The Michigan Lancers
Chapter 4. March–May 1862: Victories without Blood Is McClellan's Plan
Chapter 5. May–June 1862: The Bullets Rained in Ranks around Me
Chapter 6. July–August 1862: It Was Awful to Look Upon
Chapter 7. August–September 1862: Hurrah for Hell
Chapter 8. September–December 1862: Farewell, McClellan, You Are About Played Out
Chapter 9. December 1862–January 1863: A Terrible and Destructive Fire
Chapter 10. January–April 1863: This Cussed Soil of Virginia
Chapter 11. April–May 1863: All the Devils in Hell
Chapter 12. May–July 1863: We Shall Fight before the Fourth of July
Chapter 13. July 2, 1863: The Most Desperate Fighting I Ever Saw
Chapter 14. July–November 1863: We Are Not Fighting for Generals, but Our Country
Chapter 15. November 1863–May 1864: Old Lee Is a Tough Cuss
Chapter 16. May–June 1864: Battles without Gaining Ground
Chapter 17. June–September 1864: I Am Not Much More Than a Shadow
Chapter 18. September–December 1864: The Worst Fire a Mortal Ever Endured
Chapter 19. December 1864–April 1865: A Blue Whiplash Encircling Lee
Chapter 20. April–July 1865: Think of the Noble Spirits We Lost
Epilogue. Your Names Are an Eternal Benediction
Appendix. Roster of the 16th Michigan Infantry Regiment
Notes
Bibliography
Index
REQUEST ACCESSIBLE FILE