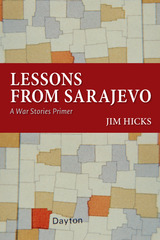 Lessons from Sarajevo: A War Stories Primer
by Jim Hicks
University of Massachusetts Press
eISBN: 978-1-61376-333-9
In today’s world, our television screens are filled with scenes from countless conflicts across the globe—commanding our attention and asking us to choose sides. In this insightful and wide-ranging book, Jim Hicks treats historical representation, and even history itself, as a text, asking questions such as Who is speaking?, Who is the audience?, and What are the rules for this kind of talk? He argues that we must understand how war stories are told in order to arm ourselves against them. In a democracy, we are each responsible for policy decisions taken on our behalf. So it is imperative that we gain fluency in the diverse forms of representation (journalism, photography, fiction, memoir, comics, cinema) that bring war to us. Hicks explores the limitations of the sentimental tradition in war representation and asks how the work of artists and writers can help us to move beyond the constraints of that tradition. Ranging from Walt Whitman’s writings on the Civil War to the U.S. wars in Iraq and Afghanistan, and focusing on the innovative and creative artistic expressions arising out of the wars of the former Yugoslavia, Hicks examines how war has been perceived, described, and interpreted. He analyzes the limitations on knowledge caused by perspective and narrative position and looks closely at the distinct yet overlapping roles of victims, observers, and aggressors. In the end, he concludes, war stories today should be valued according to the extent they make it impossible for us to see these positions as assigned in advance, and immutable.
AUTHOR BIOGRAPHY
Jim Hicks is editor of The Massachusetts Review and teaches comparative literature at the University of Massachusetts Amherst.
REVIEWS
-- Michael Rothberg, author of Multidirectional Memory: Remembering the Holocaust in the Age of Decolonization