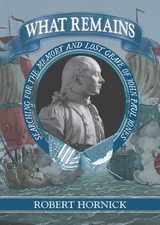 John Paul Jones is now considered a Revolutionary War hero and the father of the American Navy, his defiant words "I have not yet begun to fight!" the epitome of courage under fire. It has not always been so. When the Revolutionary War ended, Jones's celebrity vanished. His death in Paris a decade later went unnoticed; he was buried in a foreign grave and forgotten by his fellow Americans.

In What Remains, Robert Hornick explores why Jones was forgotten, the subsequent recovery of his memory and remains, and the much delayed commemoration of his achievement. The book chronicles the efforts of the men and women who, in the nineteenth and early twentieth centuries, reconstructed Jones's legacy, searched for and finally found his lost grave, and returned both his physical remains and his memory to a place of honor. It also recounts the extraordinary moment when Theodore Roosevelt utilized Jones's commemoration to proclaim America a global power. What Remains offers a fascinating story of opportunists and evangelists: of politicians who needed Jones to advance their agendas, but also of fellow warriors committed to recovering one of their own from obscurity and shame.
AUTHOR BIOGRAPHY
Robert Hornick, an independent scholar, is author of The Girls and Boys of Belchertown: A Social History of the Belchertown State School for the Feeble-Minded (University of Massachusetts Press, 2012).
REVIEWS
-- Joseph Callo, author of John Paul Jones: America's First Sea Warrior
-- Patrick H. Hannum Journal of the American Revolution
-- J. Dennis Robinson The Portsmouth Herald
-- William H. White Naval History Book Reviews