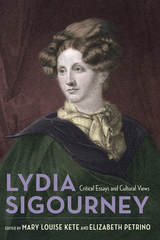 During her lifetime, Lydia Sigourney was acclaimed as nineteenth-century America's most popular woman poet and published widely as a historian, travel writer, essayist, and educator. While serious critical attention to her work languished following her death and into the twentieth century, a growing number of critics and writers have reexamined Sigourney and her large body of writing and have given her a central place in the "new canon."

This first collection of original essays devoted to the poet's work puts many of the best scholars on Sigourney together in one place and in conversation with one another. The volume includes critical essays examining her literary texts as well as essays that unpack Sigourney's participation in the cultural movements of her day. Holding powerful opinions about the role of women in society, Sigourney was not afraid to advocate against government policies that, in her view, undermined the promise of America, even as she was held up as a paragon of American womanhood and middle-class rectitude. The resulting portrait promises to engage readers who wish to know more about Sigourney's writing, her career, and the causes that inspired her.

Mary Louise Kete is associate professor of English at the University of Vermont.

Elizabeth Petrino is professor of English literature at Fairfield University.

REVIEWS
-- Claudia Stokes, author of Writers in Retrospect: The Rise of American Literary History, 1875--1910
-- Augusta Rohrbach, author of Thinking Outside the Book