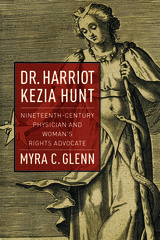 Harriot Kezia Hunt was a pioneer in a number of ways. The first woman to establish a successful medical practice in the United States, she began seeing patients in Boston in 1835 and promoted a new method of treatment by listening to women's troubles or their "heart histories." Her unsuccessful efforts to attend lectures at Harvard's Medical School galvanized her activism in the woman's rights movement. During the 1850s she played a prominent role in the annual woman's rights conventions and was the first woman in Massachusetts to publicly protest the injustice of taxing propertied women while denying them the franchise.

In this first comprehensive, full-length biography of Hunt, Myra C. Glenn shows how this single woman from a working-class Boston home became a successful physician and noted reformer, illuminating the struggle for woman's rights and the fractious and gendered nature of medicine in antebellum America.
AUTHOR BIOGRAPHY
Myra C. Glenn is professor of American history at Elmira College and author of Jack Tar's Story: The Autobiographies and Memoirs of Sailors in Antebellum America.
REVIEWS

Harriot Hunt was an important figure in nineteenth-century women's rights and reform movements. During her lifetime, she changed the landscape of medical practices. This is the biography she has long deserved.

In this meticulously researched and richly contextualized biography, Myra Glenn recovers the life of an important figure in nineteenth-century medicine, woman's rights, and social reform. Exploring Harriot Hunt's distinctive approach to treating women's ills through 'heart histories,' as well as her literary self-fashioning, struggles to attain professional standing, and outspoken social activism, this compelling narrative brings alive the centrality of gender to antebellum female experience. Hunt may have titled her memoir Glances and Glimpses, but Glenn offers a deep and searching examination of a fascinating life.