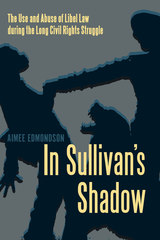 For many years, the far right has sown public distrust in the media as a political strategy, weaponizing libel law in an effort to stifle free speech and silence African American dissent. In Sullivan's Shadow demonstrates that this strategy was pursued throughout the civil rights era and beyond, as southern officials continued to bring lawsuits in their attempts to intimidate journalists who published accounts of police brutality against protestors. Taking the Supreme Court's famous 1964 case New York Times v. Sullivan as her starting point, Aimee Edmondson illuminates a series of fascinating and often astounding cases that preceded and followed this historic ruling.

Drawing on archival research and scholarship in journalism, legal history, and African American studies, Edmondson offers a new narrative of brave activists, bold journalists and publishers, and hard­headed southern officials. These little-known courtroom dramas at the intersection of race, libel, and journalism go beyond the activism of the 1960s and span much of the country's history, beginning with lawsuits filed against abolitionist William Lloyd Garrison and concluding with a suit spawned by the 1988 film Mississippi Burning.
AUTHOR BIOGRAPHY
AIMEE EDMONDSON is associate professor at the E. W. Scripps School of Journalism at Ohio University.
REVIEWS
<P>In Sullivan's Shadow balances scholarly research with readable stories of little-known publishers, civil rights activists, and citizens who found themselves on the wrong side of the legal power structure in the South and faced a broad range of legal risks through the abuse of the law of defamation.</P> <P>Edmondson's painstaking archival research and keen eye for detail bring overlooked legal dramas to life. By doing so, she honors the brave work of black journalists and activists who suffered grievously in their battle to protect free speech for all of us.</P>