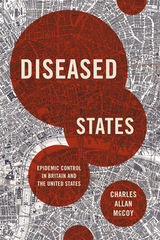 Outbreaks of Ebola, SARS, MERS, coronavirus, and pandemic influenza are brutal reminders of the dangers of infectious disease. Comparing the development of disease control in Britain and the United States, from the 1793 yellow fever outbreak in Philadelphia to the H1N1 panics of more recent times, Diseased States provides a blueprint for managing pandemics in the twenty-first century.

To understand why these two nations have handled contemporary disease threats in such different ways, Charles Allan McCoy examines when and how disease control measures were adopted in each country from the nineteenth century onward, which medical theory of disease was dominant at the time, and where disease control was located within the state apparatus. Particular starting conditions put Britain and the United States on distinct trajectories of institutionalization that led to their respective systems of disease control. As McCoy shows, even the seemingly objective matter of contagion is deeply enmeshed in social and political realities, and by developing unique systems of biopower to control the spread of disease, Britain and the United States have established different approaches of exerting political control over citizens' lives and bodies.
AUTHOR BIOGRAPHY
CHARLES ALLAN MCCOY is assistant professor of sociology at the State University of New York Plattsburgh.
REVIEWS
-- Kenneth Kirkwood, associate professor of health studies at Western University
-- Magdalena Szaflarski, associate professor of sociology and scientist in the Center for AIDS Research at the University of Alabama at Birmingham

Chapter 1 The Birth of Public Health in Britain and the Resistance to Disease Control in the United States (1793 -- 1853) Chapter 2 Sanitation and Social Welfare in the Britain, Germs and Quarantines in the United States (1854 -- 1900) Chapter 3 The Control of Disease in the 20th Century and the Response to 1918 Influenza Pandemic (1900 to the 1950s) Chapter 4 The Past Manifested in the Present: AIDS and Contemporary Threats of Infectious Disease Conclusion Notes