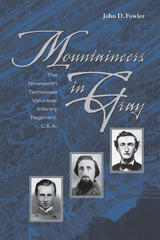 On April 26, 1865, on a farm just outside Durham, North Carolina, General Joseph E. Johnston surrendered the remnants of the Army of Tennessee to his longtime foe, General William T. Sherman. Johnston’s surrender ended the unrelenting Federal drive through the Carolinas and dashed any hope for Southern independence. Among the thirty thousand or so ragged Confederates who soon received their paroles were seventy-eight men from the Nineteenth Tennessee Volunteer Infantry Regiment. Originally consisting of over one thousand men, the unit had—through four years of sickness, injury, desertion, and death—been reduced to a tiny fraction of its former strength.

Organized from volunteer companies from the upper and lower portions of East Tennessee, the men of the Nineteenth represented an anomaly—Confederates in the midst of the largest Unionist stronghold of the South. Why these East Tennesseans chose to defy their neighbors, risking their lives and fortunes in pursuit of Southern independence, lacks a simple answer. John D. Fowler finds that a significant number of the Nineteenth’s members belonged to their region’s local elite—old, established families engaged in commercial farming or professional occupations. The influence of this elite, along with community pressure, kinship ties, fear of invasion, and a desire to protect republican liberty, generated Confederate sympathy amongst East Tennessee secessionists, including the members of the Nineteenth.

Utilizing an exhaustive exploration of primary source materials, the author creates a new model for future regimental histories—a model that goes beyond “bugles and bullets” to probe the motivations for enlistment, the socioeconomic backgrounds, the wartime experiences, and the postwar world of these unique Confederates. The Nineteenth served from the beginning of the conflict to its conclusion, marching and fighting in every major engagement of the Army of Tennessee except Perryville. Fowler uses this extensive service to explore the soldiers’ effectiveness as fighting men, the thrill and fear of combat, the harsh and often appalling conditions of camp life, the relentless attrition through disease, desertion, and death in battle, and the specter of defeat that haunted the Confederate forces in the West. This study also provides insight into the larger issues of Confederate leadership, strategy and tactics, medical care, prison life, the erosion of Confederate morale, and Southern class relations.  The resulting picture of the war is gritty, real, and all too personal. If the Civil War is indeed a mosaic of “little wars,” this, then, is the Nineteenth’s war.