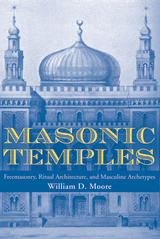 In Masonic Temples, William D. Moore introduces readers to the structures American Freemasons erected over the sixty-year period from 1870 to 1930, when these temples became a ubiquitous feature of the American landscape. As representations of King Solomon’s temple in ancient Jerusalem erected in almost every American town and city, Masonic temples provided specially designed spaces for the enactment of this influential fraternity’s secret rituals. Using New York State as a case study, Moore not only analyzes the design and construction of Masonic structures and provides their historical context, but he also links the temples to American concepts of masculinity during this period of profound economic and social transformation. By examining edifices previously overlooked by architectural and social historians, Moore decodes the design and social function of Masonic architecture and offers compelling new insights into the construction of American masculinity. Four distinct sets of Masonic ritual spaces—the Masonic lodge room, the armory and drill room of the Knights Templar, the Scottish Rite Cathedral, and the Shriners’ mosque – form the central focus of this volume. Moore argues that these spaces and their accompanying ceremonies communicated four alternative masculine archetypes to American Freemasons—the heroic artisan, the holy warrior, the adept or wise man, and the frivolous jester or fool. Although not a Freemason, Moore draws from his experience as director of the Chancellor Robert R Livingston Masonic Library in New York City, where heutilized sources previously inaccessible to scholars. His work should prove valuable to readers with interests in vernacular architecture, material culture, American studies, architectural and social history, Freemasonry, and voluntary associations.
AUTHOR BIOGRAPHY
William D. Moore is assistant professor of history and director of the public history program at the University of North Carolina Wilmington. His work has appeared in CRM: The Journal of Heritage Stewardship, Perspectives in Vernacular Architecture, and Winterthur Portfolio, among other publications.
TABLE OF CONTENTS