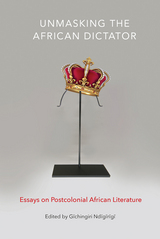 In Africa, the development of “dictatorship fiction” as a vehicle for depicting the authoritarian state arose more slowly than in other parts of the world. The dictator novel emerged earlier in Latin America, as the region’s anticolonial disengagement preceded that of Africa. Thus, the Latin American variant of this literary genre has been extensively studied, but until now there has been no comparable exploration of the fictional and dramatic representations of tyrannical regimes in Africa. In Unmasking the African Dictator, Gĩchingiri Ndĩgĩrĩgĩ redresses that imbalance with a collection of essays that fully examine the figure of the “Big Man” in African arts.
This volume features twelve articles from both established and emerging scholars who undertake representative readings of the African despot in fiction, drama, films, and music. Arranged chronologically, these essays cover postcolonial realities in a wide range of countries: Mali, Cote d’Ivoire, Senegal, the Congo, Nigeria, the Central African Republic, Somalia, Kenya, and Uganda. Included here are a variety of voices that illuminate the different aspects of dictator fiction in Africa and in the process enrich our understanding of the continent’s literature, politics, and culture.
This work features a foreword by formerly exiled Kenyan novelist, poet, and critic Ngũgĩ wa Thiong’o. Ndĩgĩrĩgĩ’s own extended introduction reviews the overarching themes found in the collection and summarizes each of the artistic works being examined while placing the individual essays in context. A pioneering study, Unmasking the African Dictator examines the works of several major authors of dictator fictions like Achebe, Ngugi, Farah, and Tamsi, among others. It is an ideal resource for both undergraduate and graduate courses on African literature, culture, and politics.

Gĩchingiri Ndĩgĩrĩgĩ is an associate professor of English at the University of Tennessee. He is the author of Ngũgĩ wa Thiongʼo’s Drama and the Kamĩrĩĩthũ Popular Theater Experiment.
REQUEST ACCESSIBLE FILE