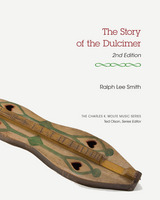 Perhaps no instrument better represents the music of Appalachia than the fretted dulcimer. The instrument was no longer confined to back porches and local music halls when Jean Ritchie so melodically thrust herself and her dulcimer into the national limelight during the folk revival of the 1950s. But where did the dulcimer, known to exist in no other folk culture in the world, come from?

In The Story of the Dulcimer, Ralph Lee Smith traces the dulcimer’s beginnings back to European immigration to America in the eighteenth and early nineteenth centuries. As German immigrants settled in Pennsylvania and Appalachia, they brought with them scheitholts, a type of northern European fretted zither. As German immigrants intermingled with English and Scotch-Irish immigrants, the scheitholt, which was customarily played to a slower tempo in German cultural music, began to be musically integrated into the faster tempos of English and Scotch-Irish ballads and folk songs. As Appalachia absorbed an increasing flow of English and Scotch-Irish immigrants and the musical traditions they brought with them, the scheitholt steadily evolved into an instrument that reflected this folk music amalgamation, and the modern dulcimer was born.

In this second edition, Smith brings the dulcimer’s history into the twenty-first century with a new preface and updates to the original edition. Copiously illustrated with images of both antique scheitholts and contemporary dulcimers, The Story of the Dulcimer is a testament to the enduring musical heritage of Appalachia and solves one of the region’s musical mysteries.

RALPH LEE SMITH is a musician specializing in traditional Appalachian music and, along with the late Jean Ritchie, is widely regarded as the leading authority on the music and history of the dulcimer. He is the author of seven collections of folk songs relating to the dulcimer. He recently published a memoir/songbook, Greenwich Village: The Happy Folk Singing Days, 1950s–1960s, which recounts his time in New York City during the folk revival.

REVIEWS
This is a fascinating, well-researched text that scholars, musicians, collectors, and luthiers will treasure as a gem of information.”
—Scott Suter, author of Shenandoah Valley Folklife
— -