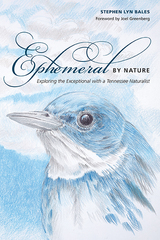 In this captivating collection of twelve essays, a testament to a lifetime’s fascination with the outdoors and its myriad wonders, naturalist Stephen Lyn Bales examines a variety of flora and fauna that in one way or another can be described as “ephemeral”—that is, fleeting, short-lived, or transient.

Focusing on his native East Tennessee, Bales introduces us to several oddities, including the ghost plant, a wispy vascular plant that resembles a rooster’s tail and grows mainly in areas devoid of sunlight; the Appalachian panda, an ancestor of today’s red panda that wandered the region millions of years ago and whose fossil remains have only recently been discovered; and the freshwater jellyfish, a tiny organism that is virtually invisible except for those hot summer days when clusters of them bloom into shimmering “medusae,” sometimes by the thousands. Other essays consider such topics as the plight of the monarch butterfly, a gorgeous insect whose populations have dropped by 90 percent in only the last two decades; the reintroduction of the lake sturgeon, one of nature’s most primitive and seldom-seen fish, into the waters of the Tennessee Valley; and the surprising emergence of coyote-wolf and coyote-dog hybrids in the eastern states.

Written with insight, humor, and heart, Ephemeral by Nature is as entertaining as it is instructive. Along with a wealth of biological details—and his own handsome pen-and-ink drawings—Bales fills the book with delightful anecdotes of field trips, species-protection efforts, and those thrilling occasions when some elusive member of the natural order shows itself to us, if only for a brief moment.

Stephen Lyn Bales, senior naturalist at Ijams Nature Center in Knoxville, is the author of Natural Histories: Stories from the Tennessee Valley and Ghost Birds: Jim Tanner and the Quest for the Ivory-billed Woodpecker, 1935–1941, both published by the University of Tennessee Press.