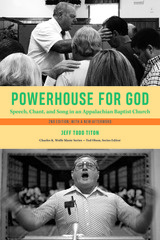 Powerhouse for God: Speech, Chant, and Song in an Appalachian Baptist Church
by Jeff Todd Titon
University of Tennessee Press, 2018
Paper: 978-1-62190-418-2
eISBN: 978-1-62190-419-9
The Fellowship Independent Baptist Church near Stanley, Virginia, was a group of fundamental Christian believers broadly representative of southern Appalachian belief and practice. Jeff Todd Titon worked with this Baptist community for more than ten years in his attempt to determine the nature of language in the practice of their religion. He traces specialized vocabulary and its applications through the acts of being saved, praying, preaching, teaching, and in particular singing. Titon argues that religious language is performed and the context of its occurrence is crucial to our understanding and to a holistic view of not only religious practice but of folklife and ethnomusicology. Titon’s monumental study of The Fellowship Independent Baptist Church produced not only the first edition book but also an album and documentary film.
In this second edition of Powerhouse for God, Titon revisits The Fellowship Independent Baptist Church nearly four decades later. Brother John Sherfey, the charismatic preacher steeped in Appalachian tradition has passed away and left his congregation to his son, Donnie, to lead. While Appalachian Virginia has changed markedly over the decades, the town of Stanley and the Fellowship Church have not. Titon relates this rarity in his new Afterword: a church founded on Biblical literalism and untouched by modern progressivism in an area of Appalachia that has seen an evolution in population, industry, and immigration.
Titon’s unforgettable study of folklife, musicology, and Appalachian religion is available for a new generation of scholars to build upon.
REQUEST ACCESSIBLE FILE