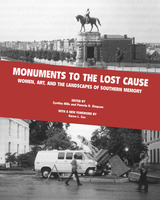 Monuments To The Lost Cause: Women, Art, And The Landscapes Of Southern Memory
by Cynthia Mills
contributions by Pamela H. Simpson
foreword by Karen L. Cox

This richly illustrated collection of essays, reissued in paperback with a new foreword by Karen L. Cox, examines Confederate memorials from Monument Avenue to Stone Mountain and explores how each monument, with its associated public rituals, testifies to the romanticized narrative of the American Civil War known as the Lost Cause. Several of the fourteen essays highlight the creative leading role played by women’s groups in memorialization, while others explore the alternative ways in which people outside white southern culture wrote their very different histories on the southern landscape. The contributors – who include Karen L. Cox, Richard Guy Wilson, Catherine W. Bishir, W. Fitzhugh Brundage, and William M.S. Ramussen – trace the origins, objectives, and changing consequences of Confederate monuments over time and the dynamics of individuals and organizations that sponsored them. Thus these essays extend the growing literature on the rhetoric of the Lost Cause by shifting the focus to the realm of the visual. They are especially relevant in the present day when Confederate symbols and monuments continue to play a central role in a public – and often emotionally charged – debate about how the South’s past should be remembered.
AUTHOR BIOGRAPHY
Before her death in 2014, Cynthia Mills was an art historian who specialized in nineteenth-century public sculpture. She was the author of Beyond Grief: Sculpture and Wonder in the Gilded Age Cemetery. Until her death in 2011, Pamela H. Simpson was the Ernest Williams II Professor of Art History at Washington and Lee University. She was the coauthor of The Architecture of Historic Lexington. Karen L. Cox is a professor of history at UNC Charlotte and author of Dixie’s Daughters: The United Daughters of the Confederacy and the Preservation of Confederate Culture.
REQUEST ACCESSIBLE FILE