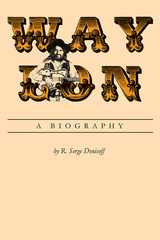 Waylon: A Biography
by R. Serge Denisoff
University of Tennessee Press
Cloth: 978-1-62190-516-5
From his earliest recordings to his posthumously released albums, the haunting baritone of Waylon Jennings marked him as an extraordinarily individualistic country music artist. This biography by the late R. Serge Denisoff, first published in 1983, recounts Waylon’s west Texas upbringing, his introduction to music as a radio announcer at thirteen years old, his tutelage by rock star Buddy Holly, and his eventual stellar yet stormy music career. Where the original 1983 biography ends, music scholar Travis Stimeling picks up with the waning years of Waylon’s recording and performing. Stimeling recounts in the new afterword Waylon’s continued musical success in the early 1980s—though his financial troubles and battle with drugs and alcohol would soon cost him both professionally and personally—his triumphant and sober return in the 1990s and collaboration with longtime recording artists in the industry, and his continued musical relevance in an evolving industry driven by Nashville’s urban popularization of country music. Additionally, series editor Ted Olson, in his foreword, touches on Waylon’s legacy and the continued influence of his outlaw style of country music. Fans of Waylon, country music, and the Nashville music scene are sure to find this second edition of R. Serge Denisoff’s classic biography a welcome addition to the publications on the father of outlaw country.
AUTHOR BIOGRAPHY
Until his death, R. SERGE DENISOFF was a professor at Bowling Green State University and author of several books on the history of music.

TRAVIS STIMELING is an associate professor in the School of Music at West Virginia University and the author or editor of several publications on country music, including The Oxford Handbook of Country Music.
REQUEST ACCESSIBLE FILE