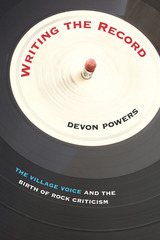 During the mid-1960s, a small group of young journalists made it their mission to write about popular music, especially rock, as something worthy of serious intellectual scrutiny. Their efforts not only transformed the perspective on the era's music but revolutionized how Americans have come to think, talk, and write about popular music ever since.

In Writing the Record, Devon Powers explores this shift by focusing on The Village Voice, a key publication in the rise of rock criticism. Revisiting the work of early pop critics such as Richard Goldstein and Robert Christgau, Powers shows how they stood at the front lines of the mass culture debates, challenging old assumptions and hierarchies and offering pioneering political and social critiques of the music. Part of a college-educated generation of journalists, Voice critics explored connections between rock and contemporary intellectual trends such as postmodernism, identity politics, and critical theory. In so doing, they became important forerunners of the academic study of popular culture that would emerge during the 1970s.

Drawing on archival materials, interviews, and insights from media and cultural studies, Powers not only narrates a story that has been long overlooked but also argues that pop music criticism has been an important channel for the expression of public intellectualism. This is a history that is particularly relevant today, given the challenges faced by criticism of all stripes in our current media environment. Powers makes the case for the value of well-informed cultural criticism in an age when it is often suggested that "everyone is a critic."
AUTHOR BIOGRAPHY
Devon Powers is assistant professor of culture and communication at Drexel University.
REVIEWS
-- Jeffrey Melnick, author of 9/11 Culture


-- The Year's Work in Critical and Cultural Theory