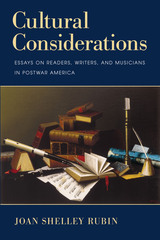 A highly regarded scholar in the fields of American cultural history and print culture, Joan Shelley Rubin is best known for her writings on the values, assumptions, and anxieties that have shaped American life, as reflected in both "high" culture and the experiences of ordinary people. In this volume, she continues that work by exploring processes of mediation that texts undergo as they pass from producers to audiences, while elucidating as well the shifting, contingent nature of cultural hierarchy.

Focusing on aspects of American literary and musical culture in the decades after World War II, Rubin examines the contests between critics and their readers over the authority to make aesthetic judgments; the effort of academics to extend the university outward by bringing the humanities to a wide public; the politics of setting poetic texts to music; the role of ideology in the practice of commissioning and performing choral works; and the uses of reading in the service of both individualism and community. Specific topics include the 1957 attack by the critic John Ciardi on the poetry of Anne Morrow Lindbergh in the Saturday Review; the radio broadcasts of the classicist Gilbert Highet; Dwight Macdonald's vitriolic depiction of the novelist James Gould Cozzens as a pernicious middlebrow; the composition and reception of Howard Hanson's "Song of Democracy"; the varied career of musician Gunther Schuller; the liberal humanism of America's foremost twentieth-century choral conductor, Robert Shaw; and the place of books in the student and women's movements of the 1960s.

What unites these essays is the author's ongoing concern with cultural boundaries, mediation, and ideology--and the contradictions they frequently entail.
AUTHOR BIOGRAPHY
Joan Shelley Rubin is professor of history at the University of Rochester. She is author of The Making of Middlebrow Culture and Songs of Ourselves: The Uses of Poetry in America.