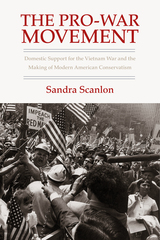 In the vast literature on the Vietnam War, much has been written about the antiwar movement and its influence on U.S. policy and politics. In this book, Sandra Scanlon shifts attention to those Americans who supported the war and explores the war's impact on the burgeoning conservative political movement of the 1960s and early 1970s.

Believing the Vietnam War to be a just and necessary cause, the pro-war movement pushed for more direct American military intervention in Southeast Asia throughout the Kennedy administration, lobbied for intensified bombing during the Johnson years, and offered coherent, if divided, endorsements of Nixon's policies of phased withdrawal. Although its political wing was dominated by individuals and organizations associated with Barry Goldwater's presidential bids, the movement incorporated a broad range of interests and groups united by a shared antipathy to the New Deal order and liberal Cold War ideology.

Appealing to patriotism, conservative leaders initially rallied popular support in favor of total victory and later endorsed Nixon's call for "peace with honor." Yet as the war dragged on with no clear end in sight, internal divisions eroded the confidence of pro-war conservatives in achieving their aims and forced them to reevaluate the political viability of their hardline Cold War rhetoric. Conservatives still managed to make use of grassroots patriotic campaigns to marshal support for the war, particularly among white ethnic workers opposed to the antiwar movement. Yet in so doing, Scanlon concludes, they altered the nature and direction of the conservative agenda in both foreign and domestic policy for years to come.
AUTHOR BIOGRAPHY
Sandra Scanlon is lecturer in American history at University College, Dublin.