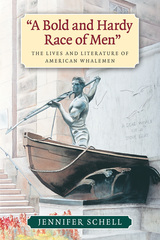 In his novel Miriam Coffin, or The Whale-Fishermen (1834), Joseph C. Hart proclaimed that his characters were “a bold and hardy race of men,” who deserved the “expressive title of American Whale-Fishermen.” Hart was not the only American author to applaud these physical laborers as the embodiment of national manhood. Heroic portraits of whalers first appeared in American literature during the 1780s, and they proliferated across time. Writers as various as Lydia Howard Huntley Sigourney, Frederick Douglass, and Walt Whitman celebrated the talents of the seafarers who transformed the New England whale fishery into a globally dominant industry. But these images did not go unchallenged. Alternative visions—some of which undermined the iconic status of the trade and its workers—began to proliferate. Even so, these depictions did very little to dismantle the notion that whaling men were prime exemplars of a proud American work ethic. To explain why this industry had such a widespread and enduring impact on American literature, Jennifer Schell juxtaposes and analyzes a wide array of eighteenth- and nineteenth-century whaling narratives. Drawing on various studies of masculinity, labor history, and transnationalism, Schell shows how this particular type of maritime work, and the traits and values associated with it, helped to shape the American literary, cultural, and historical imagination. In the process, she reveals the diverse, flexible, and often contradictory meanings of gender, class, and nation in nineteenth-century America.
AUTHOR BIOGRAPHY
Jennifer Schell is assistant professor of English at the University of Alaska Fairbanks.