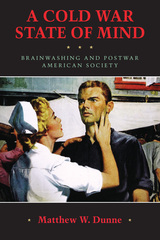 First popularized during the 1950s, the concept of “brainwashing” is often viewed as an example of Cold War paranoia, an amusing relic of a bygone era. Yet as Matthew W. Dunne shows in this study, over time brainwashing came to connote much more than a sinister form of Communist mind control, taking on broader cultural and political meanings. Moving beyond well-known debates over Korean War POWs and iconic cultural texts like The Manchurian Candidate, Dunne explores the impact of the idea of brainwashing on popular concerns about freedom, individualism, loyalty, and trust in authority. By the late 1950s the concept had been appropriated into critiques of various aspects of American life such as an insistence on conformity, the alleged “softening” of American men, and rampant consumerism fueled by corporate advertising that used “hidden” or “subliminal” forms of persuasion. Because of these associations and growing anxieties about the potential misuse of psychology, concerns about brainwashing contributed to a new emphasis on individuality and skepticism toward authority in the 1960s. The notion even played an unusual role in the 1968 presidential race, when Republican frontrunner George Romney’s claim that he had been “brainwashed” about the Vietnam War by the Johnson administration effectively destroyed his campaign. In addition to analyzing the evolving meaning of brainwashing over an extended period of time, A Cold War State of Mind explores the class and gender implications of the idea, such as the assumption that working-class POWs were more susceptible to mind control and that women were more easily taken in by the manipulations of advertisers.
AUTHOR BIOGRAPHY
Matthew W. Dunne is instructor of political science and history at Housatonic Community College in Bridgeport.