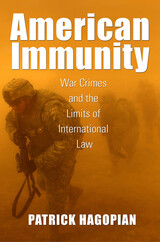 In 1955 the Supreme Court ruled that veterans of the U.S. armed forces could not be court-martialed for overseas crimes that were not detected until after they had left military service. Territorial limitations placed such acts beyond the jurisdiction of civilian courts, and there was no other American court in which they could be adjudicated. As a result, a jurisdictional gap emerged that for decades exempted former troops from prosecution for war crimes. "This was not merely a theoretical possibility," Patrick Hagopian writes. Over a dozen former soldiers who participated in the My Lai massacre did in fact "get away with murder." Further court rulings expanded the gap to cover civilian employees and contractors that accompanied the armed forces.

In 2000 Congress attempted to close the jurisdictional gap with passage of the Military Extraterritorial Jurisdiction Act. The effectiveness of that legislation is still in question, however, since it remains unclear how willing civilian American juries will be to convict veterans for conduct in foreign war zones.
AUTHOR BIOGRAPHY
Patrick Hagopian is senior lecturer in History and American Studies at Lancaster University and author of The Vietnam War in American Memory: Veterans, Memorials, and the Politics of Healing (University of Massachusetts Press, 2009).