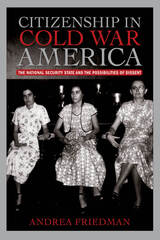 In the wake of 9/11, many Americans have deplored the dangers to liberty posed by a growing surveillance state. In this book, Andrea Friedman moves beyond the standard security/liberty dichotomy, weaving together often forgotten episodes of early Cold War history to reveal how the obsession with national security enabled dissent and fostered new imaginings of democracy.

The stories told here capture a wide-ranging debate about the workings of the national security state and the meaning of American citizenship. Some of the participants in this debate—women like war bride Ellen Knauff and Pentagon employee Annie Lee Moss—were able to make their own experiences compelling examples of the threats posed by the national security regime. Others, such as Ruth Reynolds and Lolita Lebrón, who advocated an end to American empire in Puerto Rico, or the psychiatrist Fredric Wertham, who sought to change the very definition of national security, were less successful. Together, however, they exposed the gap between democratic ideals and government policies.

Friedman traverses immigration law and loyalty boards, popular culture and theoretical treatises, U.S. court-rooms and Puerto Rican jails, to demonstrate how Cold War repression made visible in new ways the unevenness and limitations of American citizenship. Highlighting the ways that race and gender shaped critiques and defenses of the national security regime, she offers new insight into the contradictions of Cold War political culture.
AUTHOR BIOGRAPHY
Andrea Friedman is associate professor of history and of women's, gender, and sexuality studies at Washington University in St. Louis.