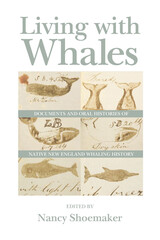 Native Americans along the coasts of southern New England and Long Island have had close ties to whales for thousands of years. They made a living from the sea and saw in the world's largest beings special power and meaning. After English settlement in the early seventeenth century, the region's natural bounty of these creatures drew Natives and colonists alike to develop whale hunting on an industrial scale. By the nineteenth century, New England dominated the world in whaling, and Native Americans contributed substantially to whaleship crews.

In Living with Whales, Nancy Shoemaker reconstructs the history of Native whaling in New England through a diversity of primary documents: explorers' descriptions of their "first encounters," indentures, deeds, merchants' accounts, Indian overseer reports, crew lists, memoirs, obituaries, and excerpts from journals kept by Native whalemen on their voyages. These materials span the centuries-long rise and fall of the American whalefishery and give insight into the far-reaching impact of whaling on Native North American communities. One chapter even follows a Pequot Native to New Zealand, where many of his Maori descendants still reside today.

Whaling has left behind a legacy of ambivalent emotions. In oral histories included in this volume, descendants of Wampanoag and Shinnecock whalemen reflect on how whales, whaling, and the ocean were vital to the survival of coastal Native communities in the Northeast, but at great cost to human life, family life, whales, and the ocean environment.
AUTHOR BIOGRAPHY
Nancy Shoemaker is professor of history at the University of Connecticut.