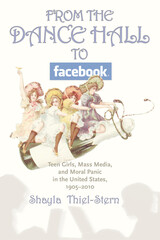 From the days of the penny press to the contemporary world of social media, journalistic accounts of teen girls in trouble have been a mainstay of the U.S. news media. Often the stories represent these girls as either victims or whores (and sometimes both), using journalistic storytelling devices and news-gathering practices that question girls' ability to perform femininity properly, especially as they act in public recreational space. These media accounts of supposed misbehavior can lead to moral panics that then further silence the voices of teenagers and young women.

In From the Dance Hall to Facebook, Shayla Thiel-Stern takes a close look at several historical snapshots, including working-class girls in dance halls of the early 1900s; girls' track and field teams in the 1920s to 1940s; Elvis Presley fans in the mid-1950s; punk rockers in the late 1970s and early 1980s; and girls using the Internet in the early twenty-first century. In each case, issues of gender, socioeconomic status, and race are explored within their historical context. The book argues that by marginalizing and stereotyping teen girls over the past century, mass media have perpetuated a pattern of gendered crisis that ultimately limits the cultural and political power of the young women it covers.
AUTHOR BIOGRAPHY
Shayla Thiel-Stern is assistant professor in journalism and mass communication at the University of Minnesota, and author of Instant Identity: Adolescent Girls and the World of Instant Messaging.