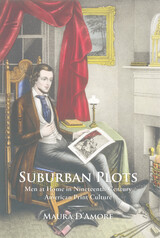 In the middle of the nineteenth century, as Americans contended with rapid industrial and technological change, readers relied on periodicals and books for information about their changing world. Within this print culture, a host of writers, editors, architects, and reformers urged men to commute to and from their jobs in the city, which was commonly associated with overcrowding, disease, and expense. Through a range of materials, from pattern books to novels and a variety of periodicals, men were told of the restorative effects on body and soul of the natural environment, found in the emerging suburbs outside cities such as New York, Boston, and Philadelphia. They were assured that the promise of an ideal home, despite its association with women’s work, could help to motivate them to engage in the labor and commute that took them away from it each day. In Suburban Plots, Maura D’Amore explores how Henry David Thoreau, Henry Ward Beecher, Donald Grant Mitchell, Nathaniel Hawthorne, Nathaniel Parker Willis, and others utilized the pen to plot opportunities for a new sort of male agency grounded, literarily and spatially, in a suburbanized domestic landscape. D’Amore uncovers surprising narratives that do not fit easily into standard critical accounts of midcentury home life. Taking men out of work spaces and locating them in the domestic sphere, these writers were involved in a complex process of portraying men struggling to fulfill fantasies outside of their professional lives, in newly emerging communities. These representations established the groundwork for popular conceptions of suburban domestic life that remain today.
AUTHOR BIOGRAPHY
Maura D’Amore is assistant professor of English at Saint Michael’s College.