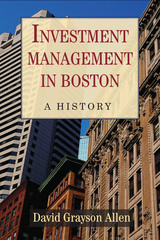 Presented here for the first time is the history of Boston's evolution as a center of American money management from early settlement to the twenty-first century. Within a few decades after the Revolution, Bostonians built up an impressive mercantile and industrial economy, and used wealth accrued from the China trade, New England mills, and other ventures to establish the most important stock exchange in America. They also created the "Boston trustee," a unique professional who managed private fortunes over generations. During the late nineteenth century, Boston financial institutions were renowned as bastions of stability and conservatism in an era of recurrent economic panics and frequent failures.

It was not until the twentieth century that Boston became better known for its role in investment management. In 1924, local financiers created the first mutual fund, an innovation almost a century in the making. After World War II, Boston originated venture capital with the founding of American Research & Development. This was soon followed by the development of private equity, the growth of the mutual fund industry, the pension "revolution" that changed and strengthened money management, the evolution in management of institutional endowments, and the rise of new family offices and hedge funds. The contributions of fiduciaries and investment managers have played an important part in the rise of the "New Boston" and made the city one of the most vibrant financial capitals in the world.

Investment Management in Boston is published in association with Massachusetts Historical Society.
AUTHOR BIOGRAPHY
David Grayson Allen is a principal of Allen Associates, a historical consulting firm in Concord, Massachusetts, and the author of numerous books, including, most recently, The Olmsted National Historic Site and the Growth of Historic Landscape Preservation.