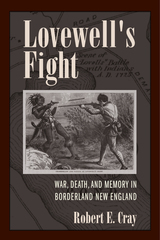 In May 1725, during a three-year conflict between English colonists and the Eastern Abenaki Nation, a thirty-four-man expedition led by Captain John Lovewell set out to ambush their adversaries, acquire some scalp bounties, and hasten the end of the war. Instead, the Abenakis staged a surprise attack of their own at Pigwacket, Maine, that left more than a third of the New Englanders dead or severely wounded. Although Lovewell himself was slain in the fighting, he emerged a martyred hero, celebrated in popular memory for standing his ground against a superior enemy force.

In this book, Robert E. Cray revisits the clash known as "Lovewell's Fight" and uses it to illuminate the themes of war, death, and memory in early New England. He shows how a military operation plagued from the outset by poor decision-making, and further marred by less-than-heroic battlefield behavior, came to be remembered as early America's version of the Alamo. The government of Massachusetts bestowed payouts, pensions, and land on survivors and widows of the battle, while early chroniclers drafted a master narrative for later generations to emboss. William Henry Longfellow, Nathaniel Hawthorne, and Henry David Thoreau kept the story alive for later generations. Although some nineteenth-century New Englanders disapproved of Lovewell's notoriety as a scalp hunter, it did not prevent the dedication of a monument in his honor at the Fryeburg, Maine, battlesite in 1904.

Even as the actual story of "Lovewell's Fight" receded into obscurity—a bloody skirmish in a largely forgotten war—it remained part of New England lore, one of those rare military encounters in which defeat transcends an opponent's victory to assume the mantle of legend.
AUTHOR BIOGRAPHY
Robert E. Cray is professor of history at Montclair State University.