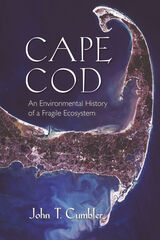 To many, Cape Cod represents the classic setting for an American summer vacation. Attracting seasonal tourists with picturesque beaches and abundant seafood, the Cape has held a place in our national imagination for almost two hundred years. People have been drawn to its beauty and resources since Native Americans wandered up its long sandy peninsula some 12,000 years ago, while writers such as Henry David Thoreau and Norman Mailer have celebrated its mystery and allure. But, despite its idealized image, Cape Cod has a long history of scarcity and an increasingly evident fragility.

John T. Cumbler's book offers an environmental, social, and economic history of Cape Cod told through the experiences of residents as well as visitors. He notes that over the past four hundred years the Cape has experienced three regimes of resource utilization. The first regime of Native Americans who lived relatively lightly on the land was supplanted by European settlers who focused on production and extraction. This second regime began in the age of sail but declined through the age of steam as the soil and seas failed to yield the resources necessary to sustain continuing growth. Environmental and then economic crises during the second half of the nineteenth century eventually gave way to the third regime of tourism and recreation. But this regime has its own environmental costs, as residents have learned over the last half century.

Although the Cape remains a special place, its history of resource scarcity and its attempts to deal with that scarcity offer useful lessons for anyone addressing similar issues around the globe.
AUTHOR BIOGRAPHY
John T. Cumbler is professor of history at the University of Louisville and spends half of the year in Wellfleet, Massachusetts. He is the author of numerous books, including From Abolition to Rights for All: The Making of a Reform Community in the Nineteenth Century and Reasonable Use: The People, the Environment, and the State, New England, 1790–1930.