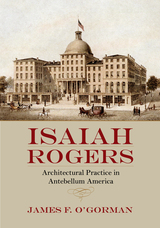 When Isaiah Rogers died in 1869, the Cincinnati Daily Times noted that "in his profession he was, perhaps, better known than any other person in the country." Yet until now there has been no study that fully examines his remarkable, influential, and instructive career. Based largely on Rogers's own diary, this book tells his story and adds much to our understanding of architectural practice in the United States before the Civil War.

In 1944 the distinguished historian Talbot Hamlin wrote of New York's Merchant Exchange (1836–42) that the building had "been so grandly conceived, so simply and directly planned, and so beautifully detailed . . . [that] the whole was welded inextricably into one powerful organic conception that shows Rogers as a great architect in the fullest sense of the word." Rogers's Tremont House in Boston has been called the world's first modern hotel; it spawned many progeny, from his first Astor House in New York to his Burnet House in Cincinnati and beyond.

Rogers designed buildings from Maine to Georgia and from Boston to Chicago to New Orleans, supervising their construction while traveling widely to procure materials and workmen for the job. He finished his career as Architect of the Treasury Department during the Civil War. In this richly illustrated volume, James F. O'Gorman offers a deft portrait of an energetic practitioner at a key time in architectural history, the period before the founding of the American Institute of Architects in 1857.
AUTHOR BIOGRAPHY
James F. O'Gorman is Grace Slack McNeil Professor of the History of Art Emeritus at Wellesley College and a widely acclaimed lecturer, historian, and author of numerous books, including Accomplished in All Departments of Art: Hammatt Billings of Boston, 1818–1874 (University of Massachusetts Press, 1998).