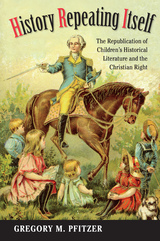 Recently publishers on the Christian Right have been reprinting nineteenth-century children's history books and marketing them to parents as "anchor texts" for homeschool instruction. Why, Gregory M. Pfitzer asks, would books written more than 150 years ago be presumed suitable for educating twenty-first-century children? The answer, he proposes, is that promoters of these recycled works believe that history as a discipline took a wrong turn in the early twentieth century, when progressive educators introduced social studies methodologies into public school history classrooms, foisting upon unsuspecting and vulnerable children ideologically distorted history books.

In History Repeating Itself, Pfitzer tests these assertions by scrutinizing and contextualizing the original nineteenth-century texts on which these republications are based. He focuses on how the writers borrowed from one another to produce works that were similar in many ways yet differed markedly in terms of pedagogical strategy and philosophy of history. Pfitzer demonstrates that far from being non-ideological, these works were rooted in intense contemporary debates over changing conceptions of childhood.

Pfitzer argues that the repurposing of antiquated texts reveals a misplaced resistance to the idea of a contested past. He also raises essential philosophical questions about how and why curricular decisions are shaped by the "past we choose to remember" on behalf of our children.
AUTHOR BIOGRAPHY
Gregory M. Pfitzer is professor of American studies at Skidmore College and author, most recently, of Popular History and the Literary Marketplace, 1840–1920 (University of Massachusetts Press, 2008).