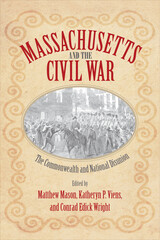 All states are not created equal, at least not when it comes to their influence on American history. That assumption underlies Massachusetts and the Civil War. The volume’s ten essays coalesce around the national significance of Massachusetts through the Civil War era, the ways in which the commonwealth reflected and even modeled the Union’s precarious but real wartime unification, and the Bay State’s postwar return to the schisms that predated the war. Rather than attempting to summarize every aspect of the state’s contribution to the wartime Union, the collection focuses on what was distinctive about its influence during the great crisis of national unity. In the first section, “The Opposition to Slavery,” essays by John Stauffer, Dean Grodzins, Peter Wirzbicki, and Richard S. Newman demonstrate the central role Massachusetts played in the rise of both the antislavery movement and abolitionism. They show how slavery’s foes united, planned, and understood their cause, and how they envisioned a postwar nation free of servitude. In the second section, “The War Years,” Matthew Mason, Carol Bundy, and Ronald J. Zboray and Mary Saracino Zboray investigate how the exigencies of war unified the commonwealth across party lines and over the distance between home and the front. In the final section, “Reconciliation,” Sarah J. Purcell, Amy Morsman, and Kanisorn Wongsrichanalai probe postwar efforts to recover from the war’s profound disruptions.
AUTHOR BIOGRAPHY
Matthew Mason is associate professor of history at Brigham Young University. Kathryn P. Viens is research coordinator at the Massachusetts Historical Society. Conrad Edick Wright is Worthington C. Ford Editor and director of research at the Massachusetts Historical Society and author of Revolutionary Generation: Harvard Men and the Consequences of Independence (University of Massachusetts Press, 2005).