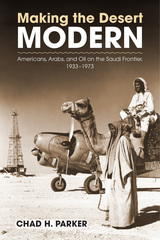 In 1933 American oilmen representing what later became the Arabian American Oil Company (Aramco) signed a concession agreement with the Saudi Arabian king granting the company sole proprietorship over the oil reserves in the country's largest province. As drilling commenced and wells proliferated, Aramco soon became a major presence in the region. In this book Chad H. Parker tells Aramco's story, showing how an American company seeking resources and profits not only contributed to Saudi "nation building" but helped define U.S. foreign policy during the early Cold War.

In the years following World War II, as Aramco expanded its role in Saudi Arabia, the idea of "modernization" emerged as a central component of American foreign policy toward newly independent states. Although the company engaged in practices supportive of U.S. goals, its own modernizing efforts tended to be pragmatic rather than policy-driven, more consistent with furthering its business interests than with validating abstract theories. Aramco built the infrastructure necessary to extract oil and also carved an American suburb out of the Arabian desert, with all the air-conditioned comforts of Western modern life. At the same time, executives cultivated powerful relationships with Saudi government officials and, to the annoyance of U.S. officials, even served the monarchy in diplomatic disputes. Before long the company became the principal American diplomatic, political, and cultural agent in the country, a role it would continue to play until 1973, when the Saudi government took over its operation.
AUTHOR BIOGRAPHY
Chad H. Parker is associate professor of history at the University of Louisiana at Lafayette.