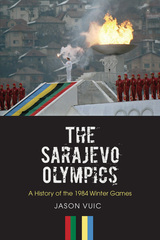 To most observers, the 1984 Winter Olympics in Sarajevo, Yugoslavia, were an unmitigated success. That year, the unlikeliest of candidate cities in the unlikeliest of candidate countries did what many had thought impossible: it hosted an international sports competition at the highest level, housing and feeding hundreds of athletes and thousands of tourists while broadcasting a positive image of socialist Yugoslavia to the world.

The first Winter Games held in a communist country, Sarajevo also marked the first Olympic confrontation of Soviet and American athletes since the U.S. boycott of the 1980 Moscow Summer Games. And the competitions themselves were spectacular and memorable. This was the Olympics of British ice dancers Jayne Torvill and Christopher Dean, American skiers "Wild Bill" Johnson and Debbie Armstrong, and East German skaters Katarina Witt and Karin Enke, not to mention a Soviet hockey team that rebounded from its stunning loss to the Americans at Lake Placid four years earlier to win all seven of its matches.

Yet The Sarajevo Olympics is more than just a history of sport. Jason Vuic also retraces the history of the Olympic movement, analyzes the inner workings of the International Olympic Committee during the troubled 1970s and 1980s, and places the 1984 Winter Games in the context of Cold War geopolitics. The book begins and ends by reminding readers that less than a decade after it hosted the Olympics, the Bosnian city of Sarajevo found itself at the vortex of a bloody and brutal civil war that would end with the dissolution of the multiethnic Yugoslavian state.
AUTHOR BIOGRAPHY
An independent scholar and freelance writer, Jason Vuic holds a PhD in Balkan and Eastern European history from Indiana University. His previous publications include The Yugo: The Rise and Fall of the Worst Car in History.