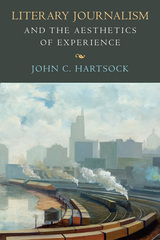 Proponents and practitioners of narrative literary journalism have sought to assert its distinctiveness as both a literary form and a type of journalism. In Literary Journalism and the Aesthetics of Experience, John C. Hartsock argues that this often neglected kind of journalism—exemplified by such renowned works as John Hersey’s Hiroshima, James Agee’s Let Us Now Praise Famous Men, and Joan Didion’s Slouching Towards Bethlehem—has emerged as an important genre of its own, not just a hybrid of the techniques of fiction and the conventions of traditional journalism. Hartsock situates narrative literary journalism within the broader histories of the American tradition of “objective” journalism and the standard novel. While all embrace the value of narrative, or storytelling, literary journalism offers a particular “aesthetics of experience” lacking in both the others. Not only does literary journalism disrupt the myths sustained by conventional journalism and the novel, but its rich details and attention to everyday life question readers’ cultural assumptions. Drawing on the critical theories of Nietzsche, Bakhtin, Benjamin, and others, Hartsock argues that the aesthetics of experience challenge the shibboleths that often obscure the realities the other two forms seek to convey. At a time when print media appear in decline, Hartsock offers a thoughtful response to those who ask, “What place if any is there for a narrative literary journalism in a rapidly changing media world?”
AUTHOR BIOGRAPHY
John C. Hartsock is professor of communication studies at SUNY Cortland. He is author of A History of American Literary Journalism: The Emergence of a Modern Narrative Form (University of Massachusetts Press, 2001), which won the History Award of the Association for Education in Journalism and Mass Communication and the “Book of the Year Award” of the American Journalism Historians Association.