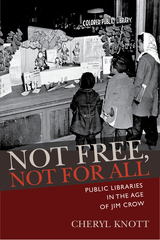 Americans tend to imagine their public libraries as time-honored advocates of equitable access to information for all. Through much of the twentieth century, however, many black Americans were denied access to public libraries or allowed admittance only to separate and smaller buildings and collections. While scholars have examined and continue to uncover the history of school segregation, there has been much less research published on the segregation of public libraries in the Jim Crow South. In fact, much of the writing on public library history has failed to note these racial exclusions.

In Not Free, Not for All, Cheryl Knott traces the establishment, growth, and eventual demise of separate public libraries for African Americans in the South, disrupting the popular image of the American public library as historically welcoming readers from all walks of life. Using institutional records, contemporaneous newspaper and magazine articles, and other primary sources together with scholarly work in the fields of print culture and civil rights history, Knott reconstructs a complex story involving both animosity and cooperation among whites and blacks who valued what libraries had to offer. African American library advocates, staff, and users emerge as the creators of their own separate collections and services with both symbolic and material importance, even as they worked toward dismantling those very institutions during the era of desegregation.
AUTHOR BIOGRAPHY
Cheryl Knott is associate professor in the School of Information at the University of Arizona, Tucson.
REVIEWS
-- Elizabeth McHenry, author of Forgotten Readers: Recovering the Lost History of African American Literary Societies


-- The Journal of American Culture