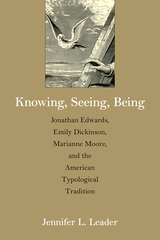 Scholars no longer see Jonathan Edwards as the fire-and-brimstone preacher who deemed his parishioners “sinners in the hands of an angry god.” Edwards now figures as caring and socially conscious and exerts increased influence as a philosopher of the American school of Protestantism. In this study, he becomes the progenitor of an alternative tradition in American letters. In Knowing, Seeing, Being, Jennifer L. Leader argues that Edwards, the nineteenth-century poet Emily Dickinson, and the twentieth-century poet Marianne Moore share a heretofore underrecognized set of religious and philosophical preoccupations. She contends that they represent an alternative tradition within American literature, one that differs from Transcendentalism and is grounded in Reformed Protestantism and its ways of reading and interpreting the King James Bible and the natural world. According to Leader, these three writers’ most significant commonality is the Protestant tradition of typology, a rigorous mode of interpreting scripture and nature through which certain figures or phenomena are read as the fulfillment of prophecy and of God’s work. Following from their similar ways of reading, they also share philosophical and spiritual questions about language, epistemology (knowing), perception (seeing), and physical and spiritual ontology (being). In connecting Edwards to these two poets, in exploring each writer’s typological imagination, and through a series of insightful readings, this innovative book reevaluates three major figures in American intellectual and literary history and compels a reconsideration of these writers and their legacies.
AUTHOR BIOGRAPHY
Jennifer L. Leader is a professor in the American Language Department at Mt. San Antonio College.