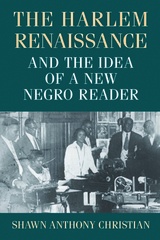 Many scholars have written about the white readers and patrons of the Harlem Renaissance, but during the period many black writers, publishers, and editors worked to foster a cadre of African American readers, or in the poet Sterling Brown's words, a "reading folk." Black newspapers featured columns that reviewed the latest African American fiction. Magazines held writing contests to urge black readers to participate in the literary culture. Through newspapers, journals, and anthologies, writers such as James Weldon Johnson, Jessie Fauset, and Gwendolyn Bennett spoke directly to their fellow African Americans to cultivate interest in literature and the intellectual tools for reading it.

In The Harlem Renaissance and the Idea of a New Negro Reader, Shawn Anthony Christian argues that print-based addresses to African Americans are a defining but understudied component of the Harlem Renaissance. Especially between 1919 and 1930, these writers promoted diverse racial representation as a characteristic of "good literature" both to exhibit black literacy and to foster black readership. Drawing on research from print culture studies, histories of racial uplift, and studies of modernism, Christian demonstrates the importance of this focus on the African American reader in influential periodicals such as The Crisis and celebrated anthologies such as The New Negro. Christian illustrates that the drive to develop and support black readers was central in the poetry, fiction, and drama of the era.
AUTHOR BIOGRAPHY
Shawn Anthony Christian is associate professor of English, African American, and American studies at Wheaton College.
REVIEWS
-- Verner Mitchell, author of This Waiting for Love: Helene Johnson, Poet of the Harlem Renaissance