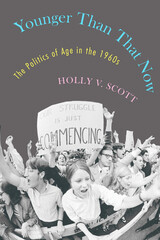 Retrospectives of the 1960s routinely include the face of youth rebellion: long-haired students occupying campus buildings, young men burning draft cards, hippies dancing at Woodstock. In Younger Than That Now, Holly V. Scott explores how the idea of "youth" served as a tactic in the political and social activism of these years. In the early part of that decade, young white activists began to learn from the civil rights movement's defiance of racism. They examined their own lives and concluded that campus rules and the draft were repression as well. As a group, they were ripe for revolution, and their age gave them a unique perspective for understanding and protesting against injustice. In short, young people began to use their youth as a political strategy.

Some in the New Left were dubious of this strategy and asked how it might damage long-term progress. Young feminists and people of color were particularly quick to question the idea that age alone was enough to sustain a movement. And the media often presented young people as impulsive and naive, undermining their political legitimacy. In tracing how "youth" took on multiple meanings as the 1960s progressed, Scott demonstrates the power of this idea to both promote and hinder social change.
AUTHOR BIOGRAPHY
Holly V. Scott holds a PhD in history from American University.