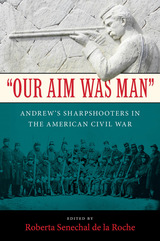 One was a father who worried about his fellow soldiers' swearing. Another hoped to enter Harvard College. The third was a farmer whose letters home depict the later stages of the war. The fourth had turned to boot making when he did not inherit land. Based on the letters, diaries, and memoirs of four members of the First Company Massachusetts Sharpshooters, known as Andrew's Sharpshooters, this book provides a rare glimpse into the experiences of Union Army snipers. The company was one of the first units in American military history to be equipped with telescope-sighted rifles to enable long-distance targeting. Despite complaints that snipers violated codes of honorable combat, the members of Andrew's Sharpshooters generally expressed quiet pride in being an elite unit of highly skilled soldiers—"cool blooded sharpshooters," as one of them said.

Introduced and edited by Roberta Senechal de la Roche, these primary accounts include new details about the equipment, training, and deployment of snipers in the Army of the Potomac. They also reveal the challenges of covert warfare and include rich detail on the everyday problems of Civil War soldiers, including bad food, disease, punishing marches, and homesickness. The collected documents also convey the trials of those left on the home front.
AUTHOR BIOGRAPHY
Roberta Senechal de la Roche is professor of history at Washington and Lee University.