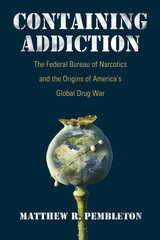 The story of America's "War on Drugs" usually begins with Richard Nixon or Ronald Reagan. In Containing Addiction, Matthew R. Pembleton argues that its origins instead lie in the years following World War II, when the Federal Bureau of Narcotics—the country's first drug control agency, established in 1930—began to depict drug control as a paramilitary conflict and
sent agents abroad to disrupt the flow of drugs to American shores.

U.S. policymakers had long viewed addiction and organized crime as profound domestic and trans-national threats. Yet World War II presented new opportunities to implement drug control on a global scale. Skeptical of public health efforts to address demand, the Federal Bureau of Narcotics believed that reducing the global supply of drugs was the only way to contain the spread of addiction. In effect, America applied a foreign policy solution to a domestic social crisis, demonstrating how consistently policymakers have assumed that security at home can only be achieved through hegemony abroad. The result is a drug war that persists into the present day.
AUTHOR BIOGRAPHY
Matthew R. Pembleton is a writer and historian based in the Washington, DC region. He teaches at American University.
REVIEWS
-- Jeremy Kuzmarov, author of The Myth of the Addicted Army: Vietnam and the Modern War on Drugs
-- Paul Gootenberg, author of Andean Cocaine: The Making of a Global Drug
-- David Courtwright, author of Dark Paradise and Forces of Habit
-- David Herzberg, author of Happy Pills in America: From Miltown to Prozac
-- Max Paul Friedman, author of Rethinking Anti-Americanism: The History of an Exceptional Concept in American Foreign Relations
-- Midwest Book Review


Introduction: Toiling in the Vineyards

Chapter 3 - Garland Williams: On the Street and Behind Enemy Lines

Chapter 5 - Constructing a Kingpin: Lucky Luciano and the FBN

Chapter 6 - Charles Siragusa and the Drug War Go Aboard